I love autumn.  It's my favorite time of year.  First of all it's the return of football, my favorite spectator sport(made even more enjoyable this year, because we're winning.)  The explosion of color that I get to enjoy while at my boys' practices and games is so beautiful and ever changing.  I love being able to go apple picking and watch fresh apple cider being pressed.  I love the crisp air that signals it's boots wearing time, without the bitter cold of winter.  People who know me, know I love to play scrabble, and this year's autumn mantel started with a scrabble player's homage to autumn.﻿ 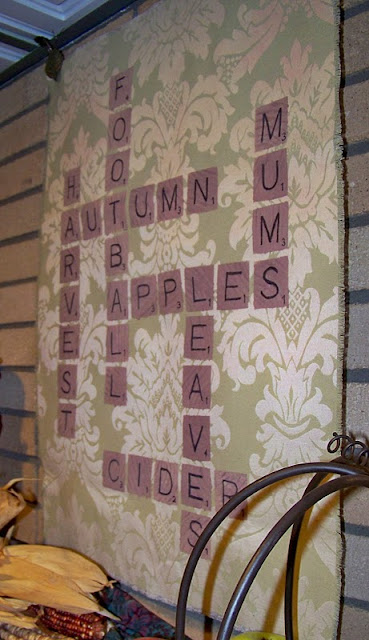 I scrunched up a piece of double knit fabric from my stash to use as a runner for my mantel and added some indian corn, 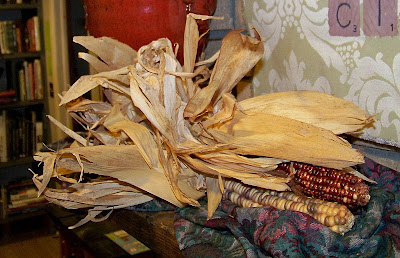 and this fantastic urn that I picked up off at HomeGoods, clearanced for only $12.  I love the leaf shaped handles and the drippy glaze. 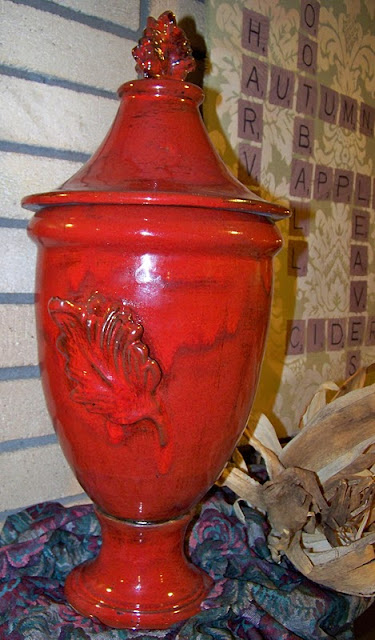 On the other side of the mantel, I placed this Smith & Hawken candle holder, that I snagged from Target last year for only $4.98.  I love the size of it, because you can easily use it to build a table centerpiece. 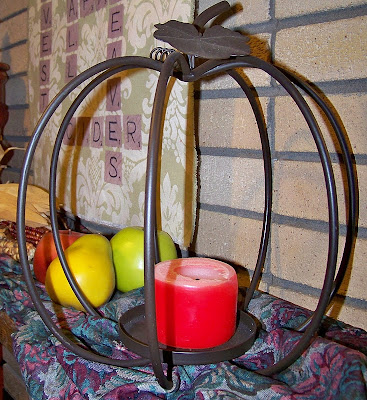 Here's what my autumn mantel looks like right now.  The fruit are just place holders, because I didn't have any gourds in my kitchen.  Easily remedied with my next grocery trip. 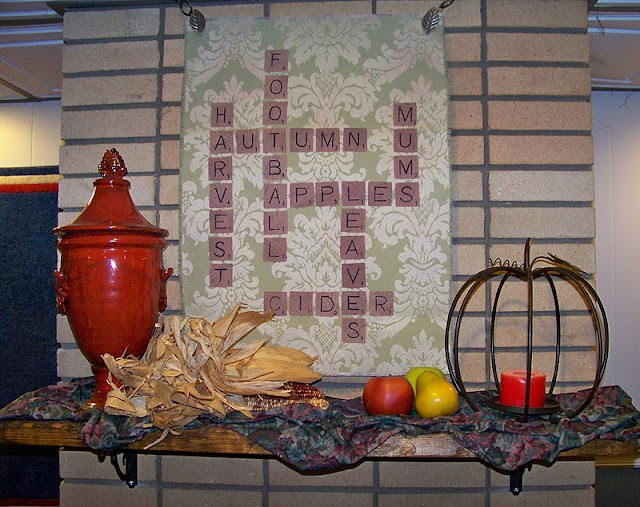 On an unrelated note, I'd love a show of hands, for or against, should I paint my brick fireplace?  What about the mantel?  Beef it up?
Thanks for popping in and decorating with me. I'm linking this up to The Charm of Home's Home Sweet Home, The Shabby Nest's Frugal Fridays, Hooked on Houses' Fall decorating party, Hope Studios' Fall Mantel linkup, and the parties below.

Sometimes my kids attack the fruit bowl like they're ravenous dogs, and sometimes fruit will sit until it starts attracting fruit flies.  I had some pears dangerously close to being pest bait, so I came up with these Pear & Nutella Dessert Bars. 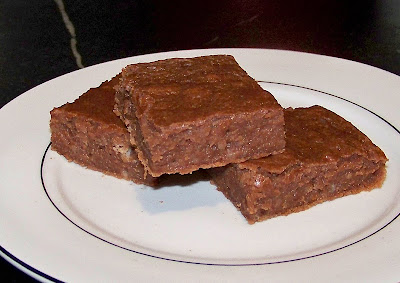 ﻿I started by peeling, and coring 6 pears, 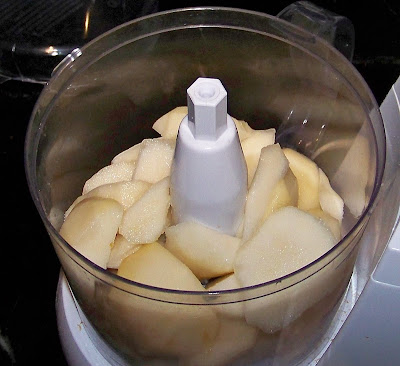 and giving them a whirl in my food processor. 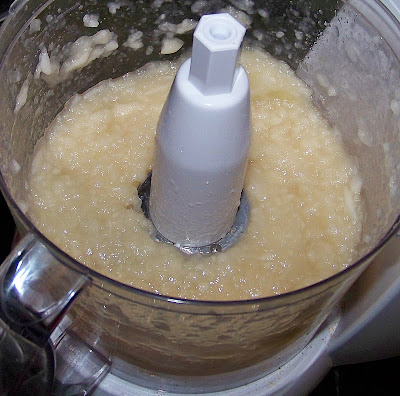 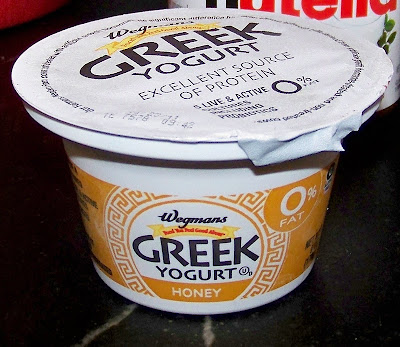 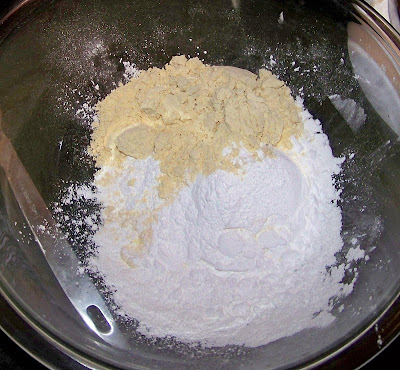 I added the pear mixture and blended thoroughly. 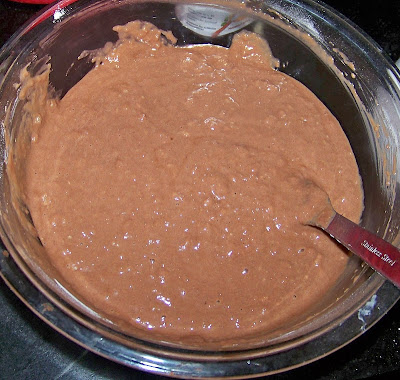 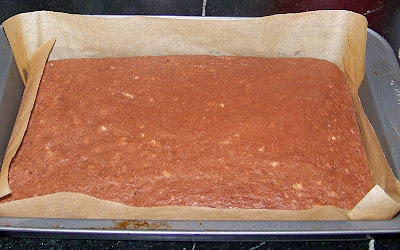 I realize I took a pic of these cut into squares, but make sure and cut them into triangles or some other non brownie shape.  These will disappoint if you're thinking brownie, but are really good if you're thinking pear dessert bar.

Thanks for popping in and baking with me.  I'm linking this up to Gluten-Free Homemaker's Gluten-Free Wednesdays.

Posted by laxsupermom at 7:05 AM 8 comments:

It's September, which means it's time for Fall Ball.  Fall Ball around here usually means some of this
﻿﻿

and some of this,
or even catching some late season baseball, 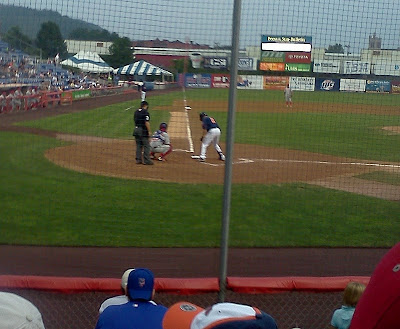 but it used to mean some of this.
﻿

WD stopped playing football a couple of years ago, but many of his teammates from his youth football years still play.  He's been friends with many of them, like The Tank, since he was 7 yrs old.  The two of them were on the same football team for 6 yrs together.﻿ 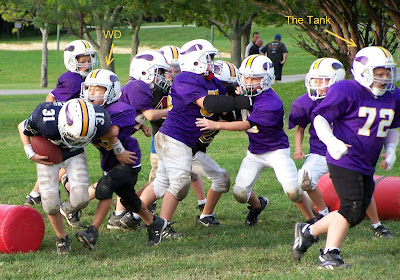 Now the Tank is a freshman, and plays first string defensive tackle on the JV team.  We of course had to go out and support him for his first high school game.  He faced double and triple teams all day, but still managed to notch several great tackles. 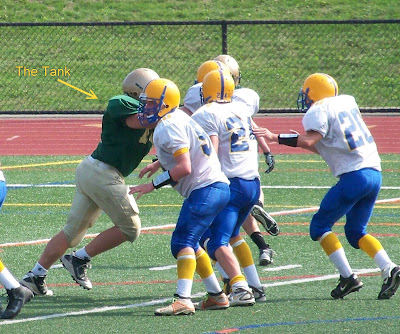 It was a beautiful day, and the boys had a great time cheering on their friends.  I had a great time, too, with one small exception.  I happened to notice a girl wearing this t-shirt.  WTF? 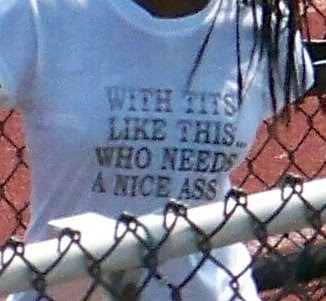 I can't understand how any parent could allow their child(and she was a child) to wear a shirt like that, much less at a school function.  I don't think it's appropriate for a 15 yr old, or really anyone at all.  (Okay, it might be funny on a 40yr old man at an adult party.)  Where do you even buy a shirt like that?  Strippers R Us?  While it's always a possibility that the girl snuck out wearing something else over the top of the shirt, the reality is that her mom was at the game, and she continually walked back and forth between her mom and her friends.  So what do you think?  Am I overreacting?  Is this just how it is?  Are things like this sold in the girls' department, and I just don't realize it, because I'm outfitting boys?
Thanks for popping in and listening to my rant.
Posted by laxsupermom at 8:05 AM 12 comments:

I love Craigslist.  Yes, you have to deal with flakes and weirdos sometimes, but it's the best place to find terrific pieces for next to nothing.  I brought this dresser home a little while ago for only $20.﻿ 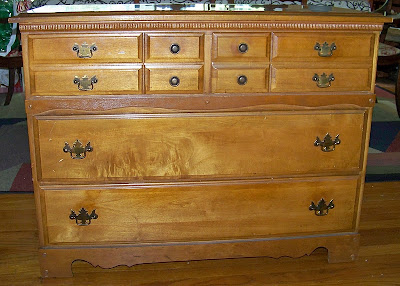 Ok, it's not much to look at, but it was all wood, solid construction with dovetailed drawers, and didn't smell icky.  That made it a winner. 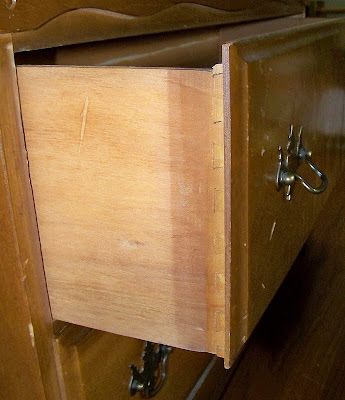 I wanted to use this dresser down in the rec room for snacks & chips for the boys & their friends.  Remember when we got that awesome deal on a frig, back in May?  I told you about it here.  Well our BFFs had outgrown their small man-fridge in their man cave, so our old 36" side by side frig went into their garage.  Of course that left them with an extra 24" frig, which made it's way back to our house last month.  I decided to carve out some space in the rec room for a snack bar area.  The frig now holds popsicles, yogurt, cheese sticks, etc.  To make it a full snack bar, I needed storage for chips & pretzels & plates & spoons.

But you know me, I couldn't just grab a dresser off Craigslist and call it done.  It needed a little bit of rehab.  I started by giving the whole piece a light sanding. 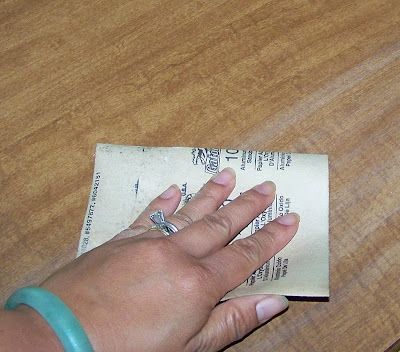 I removed the handles.  I keep a leatherman multi-tool in my purse, because you never know when you might need a pair of pliers or a screwdriver.  Such as when someone takes the phillips head screwdriver out of your perfectly organized kitchen tool drawer, that I showed you here, and forgets to replace it.  Grrr. 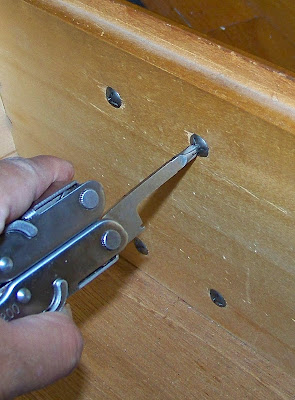 I used 2 cans of Valspar spray paint in Yellow Creme on the body of the dresser and the drawers, and 3 coats of Minwax Polyshades in Dakota Mahogany on the top, because I wanted a durable surface for the inevitable dirty ice cream scoop left on the dresser.  I love Minwax Polyshades.  It's a stain and polyurethane coating in one.  You don't need to sand to bare wood, and it still works beautifully, with just a bit of steel wool between coats.  Love, love, love the stuff. 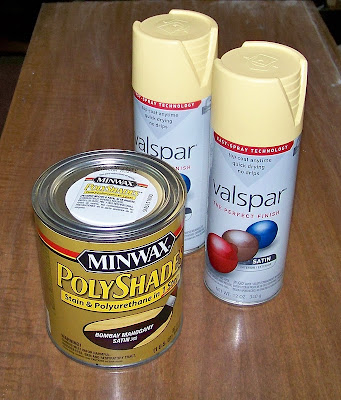 I had every intention of replacing the hardware, but the pulls on the upper drawers were smaller than the typical 3" spread, and paying a premium for a weird size for a rec room snack bar didn't make sense.
﻿
﻿

I then considered spray painting the existing hardware, but after seeing the way the tarnished brass looked against the newly spiffed up dresser, I just put them back on.  Have you priced out aged brass hardware?  My patina'ed ones were the free choice, and I love the way they look against the soft yellow. 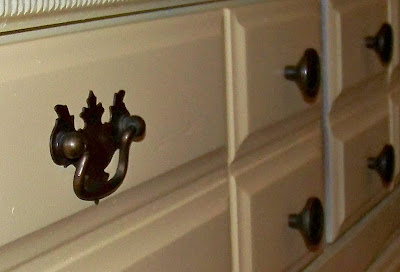 So here's my boys new snack bar(not yet in place in the rec room.) 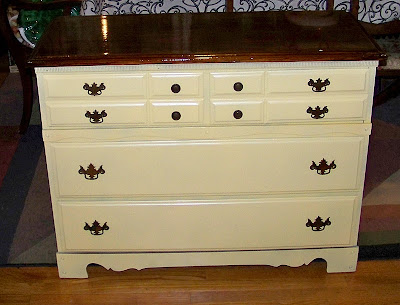 And because we all like a good before and after.  Before. 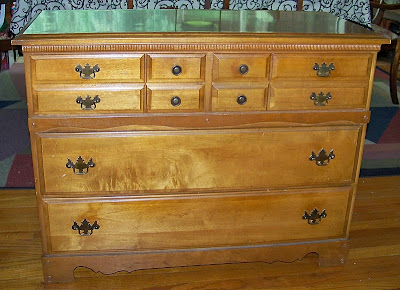 And After.  Look how much better the hardware looks, and I didn't do a thing to it.  Love! 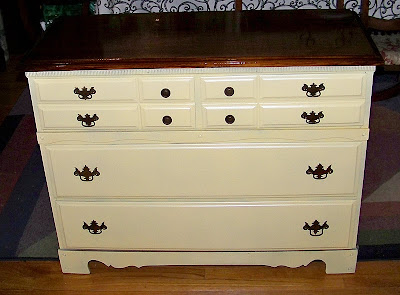 Thanks for popping in and painting with me. Linking this up to House of Grace's Best of 2011.