It may appear like I always have everything pulled together, but that isn't really the case.  Sometimes, I'll arrive home after WD's lacrosse practice with a narrow window to cook and serve dinner, before we need to head back out, without having remembered to defrost any meat or put anything in the crockpot.  A frittata can come to the rescue, by using anything I might have in the fridge.  Spinach & feta?  Great!  Tomatoes & olives?  Why not?  The other night I made a Sausage & Asparagus Frittata. 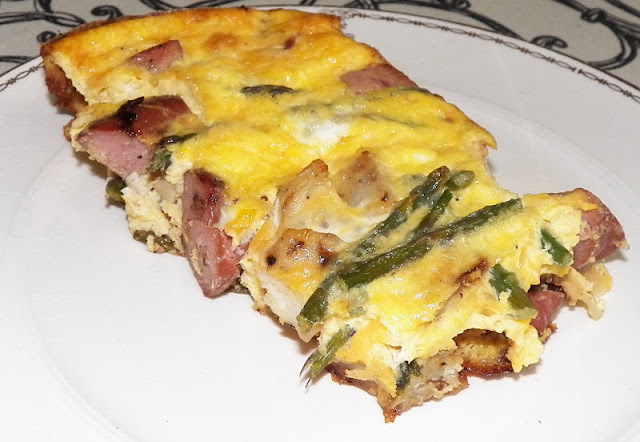 I don't have any in process pictures, because I hadn't originally been planning to share this, but SB did have 3 helpings, so here we go.  Preheat the oven to 350.  Peel & chop 4-5 potatoes, and toss them in an oven safe skillet with some olive oil on medium high heat.  I love my cast iron skillets, but any oven safe skillet is fine.  Meanwhile I chopped an onion and 1 lb of  polish sausage.  I turned the potatoes and added the onion and sausage to the pan.  Give the pan a couple of turns of the pepper grinder and a dash of garlic salt.  I washed and chopped a big handful of asparagus into 2 inch pieces and added them to the skillet after a stir.  I whisked together 8 eggs, about 1 cup milk, and 2/3 cup shredded cheddar cheese and poured them in the pan.  Move the pan to the oven and bake for about 30 minutes. 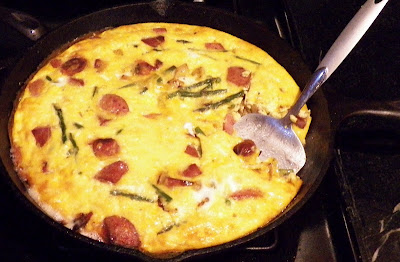 The frittata will be puffed up with some gold spots.  Frittatas are easy because you can put anything at all in them, and the whole cooking process only took 5 minutes, with each item being added as it was chopped.  The skillet actually went into the oven before it had finished preheating.  No big deal, I just adjusted the time in the oven a little. 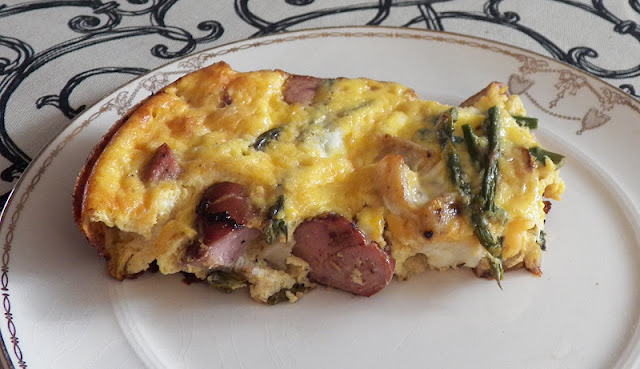 Thanks for popping in and cooking with me.  I'm linking this up with Gluten-Free Homemaker's Gluten-Free Wednesdays.
Posted by laxsupermom at 7:58 AM