How quickly a month flies by!  It's time for my monthly Before Blogging party where you can link up anything at all from before blogging whether it's something you did, made, bought, found, traveled to﻿ or whatever.  I can't wait to see what you all bring to the party.

3 years ago, we ripped out our kitchen down to the studs and replaced everything.  This could be a before and after kitchen post, but it's not.  I'm just talking counters today, specifically soapstone counters.  I've dreamed about soapstone counters since my very first apartment when I was 18.  This was long before they became so popular with the movie Something's Gotta Give

.  When we started kitchen planning, I knew that's what I wanted, but the cost of stone fabrication was way out of our budget.  Lucky for us, we're fearless DIYers, and all it took was some basic woodworking tools, and the stone which we purchased from M. Texeira in NJ.
Here's where we started.  2" thick laminate that was coming loose, stained, and burned in spots.

Soapstone comes in many varieties that have varying colors and hardness.  It took me a while to pick my stone.  When I finally picked in mid-November, they shipped out our slabs, and we were hit with a nasty snow storm which made it impossible for the delivery truck to get up our hill.  We rescheduled delivery then were hit with another 2 feet of snow.  When the slabs were finally delivered to our driveway, it was nearing Christmas.  So I let them sit in the driveway until after the holidays.  Those slabs were ice cold & heavy and we needed several beefy friends(and a half a dozen ribeyes, and a case of beer) to help with moving them. 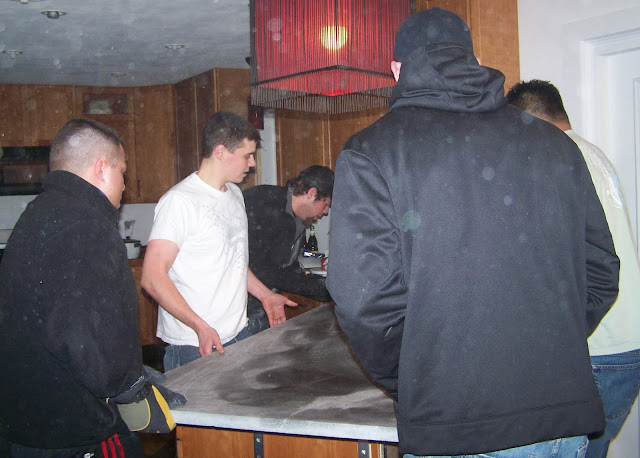 The penninsula piece was cut with straight lines before moving into place.  The curves were made using a belt sander afterwards.

For those of you who know DIY, stone dust is about 10 times worse than drywall dust.  I'm wearing a mask, my glasses(contacts kept drying out,) and ski goggles for a better seal and high impact resistance in this pic.  I also recommend doing a leave in conditioning treatment on your hair both before and after you work your stone.  Talk about split ends.

Here's the penninsula after the first oiling.  Look how young SB is here.

and my baking corner.  Love! 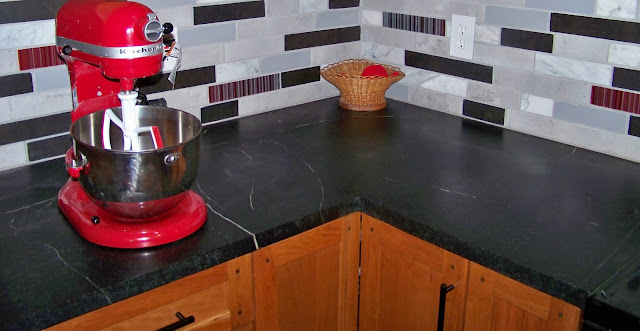 Obviously the kitchen is a lot more finished now, but this is where it all started - my love of soapstone counters.  Every other decision came afterwards.

I'm linking this up at Stuff and Nonsense's Fridays Unfolded, because a little bit of countertop petting unfolds every week for me, The DIY Showoff's DIY Project Parade, and Between Naps on the Porch's Metamorphosis Monday.
Let's get this party started.  Grab a button and link up anything you made, did, bought, etc. Before Blogging.  This link will stay open until next Thursday.
Posted by laxsupermom at 6:30 AM