Judging by my recipes page, you'd think all we ate around here were desserts and cookies.  I swear I feed my family actual food on a regular basis.  It's just that dinners around here can be a rushed affair, and I rarely remember to snap a picture before they've dug into dinner.  I did manage to grab a picture of these Pork Chops before they were hoovered off the boys plates.﻿ 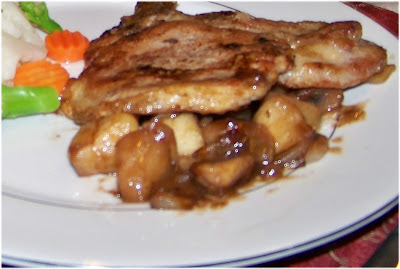 I started by drizzling a little olive oil in the pan and adding the rinsed and patted pork chops to it over medium high heat.  You'll notice that I almost always use a cast iron pan.  I love them because they hold heat so well and you can use them in the oven, too.   I don't like to crowd the pan so I browned the pork chops in batches.﻿ 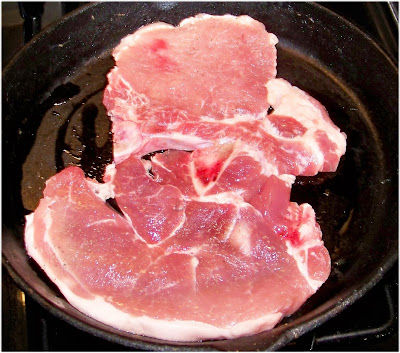 I turned them after a couple of minutes.  After both sides had been browned, ﻿I removed them from the pan and set them aside, turning the heat down to medium. 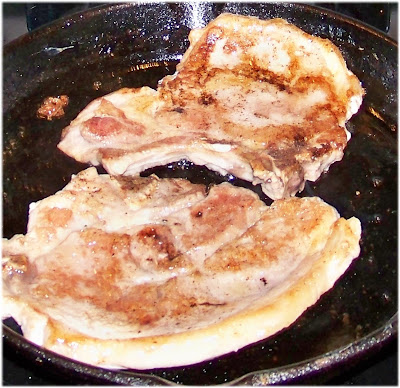 While the pork chops were browning, I peeled and cut one small onion, and 2 medium apples.  I had Idareds in the house, but whatever apple you have on hand would be fine.  ﻿ 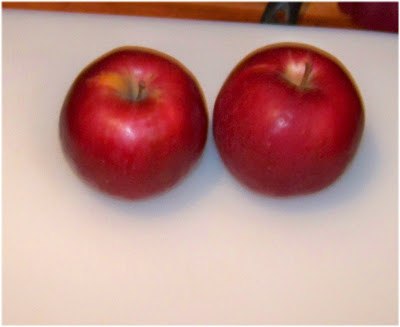 After removing the pork chops, I added the onions to the pan and let them soften before adding the apples.  I chopped half a dozen large white mushrooms and added them to the pan.  If you've trimmed your pork chops real lean, you may need to add a pat of butter to the pan.  I leave my chops a little fatty so that the fat will render out and I can use that to saute the rest.  Everything tastes better with pork fat. ;)﻿ 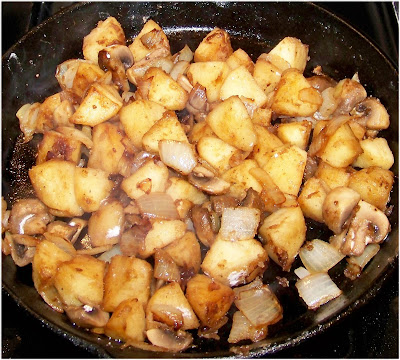 After a few minutes, I added 1 tablespoon of potato starch and let that absorb all of the grease in the pan.  This will create a roux which will then thicken the sauce.  I added about a cup of port wine.  I've made this pork chops and apple dish before with white wine, but we didn't have any in the house.  We did have port, and I'm glad I used it because the sauce was amazing.  After adding the wine to the pan, I turned off the burner and added the pork chops back to the pan.  The pan went directly into a 350 oven for 25 minutes.  I don't know why the color is so yellow in this picture, but it's the only one I have of this step. 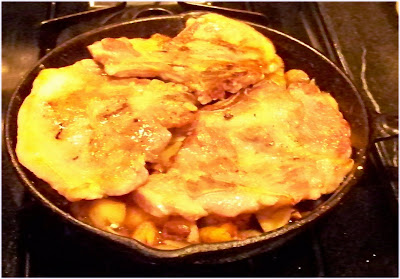 I know that I cook with wine a lot, but all of the alcohol cooks off and you can't beat the flavor of a good wine.  Look how thick and glossy the sauce is from the potato starch roux.  Yum. 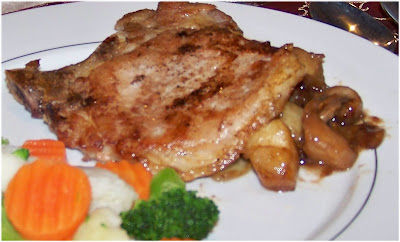 The boys all gobbled this up and were asking for more.  Thanks for popping in and cooking with me.  I'm linking this up to Gluten-Free Homemaker's Gluten-Free Wednesdays, and Lisa's Gluten-Free's Food and Health Carnival.

Posted by laxsupermom at 9:38 AM